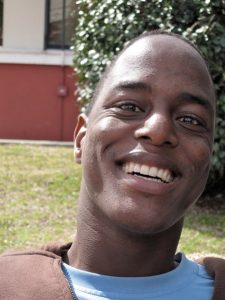 As a native of California, Khumbo Banda attended California State University-Sacramento where he came to Christ through the Chi Alpha ministry, then led by Chris Lussier. After graduating in 2010 with a Bachelor of Arts in Creative Writing, Khumbo felt led by God to become a campus missionary. He applied in 2011 and 2013, but was unable to begin his internship due to a lack of funds. Then in 2015, while attending Assemblies of God Theological Seminary (AGTS), he applied for a third time. This time he received financial support from the Minority Missionary Fund (MMF).

As a result, Khumbo was able to complete his Campus Missionary-in-Training (CMIT) internship at Western Washington University in 2017. Since then, he has been on staff with Chi Alpha at Columbus State University in Columbus, Georgia. Khumbo shares how critical MMF has been to fulfilling God’s call on his life to reach university students:

Chi Alpha gave me a family. I love my immediate family (mom, dad, and sister), but in my Chi Alpha community I learned how to put my walls down, to be myself with them. Chris Lussier answered all my questions and showed me in a real way who Jesus was. I had questions about the validity of Jesus and he explained that Jesus was a real person and that everything in the Bible did happen. In October 2007, I accepted Jesus as my Lord and Savior.

What were the challenges you faced with raising missionary funds?

It was difficult finding people to talk to. I exhausted my list quickly and I didn’t have a lot of people to talk to to begin with. I found myself having to explain what Chi Alpha was to church people and I struggled to get my family to support what I was doing. There is a general consensus within minority ethnic groups that being a missionary is not a real job. Minorities who go into missions deal with familial and cultural shame.

What are the ways that MMF has helped you?

The Minority Mobilization Fund gave me a leg up in raising support. I received confirmation of my internship the summer of 2015 and began support raising the summer of 2016. It was really hard for me to raise support. I was sending letters and meeting people face to face, but still having a tough time. The MMF got me the funds I needed to be on campus. They supported me monthly as an intern. With what I had and what they said they could help me with, I made it into the internship program. I loved the heart of the Diversity Task Force for minorities as they give so many of us the opportunity to be in missions.

What advice do you have for minority Chi Alpha students and alumni who have a heart to be missionaries?

Perseverance. As the Bible says in Romans, perseverance builds character and character builds hope. Be obedient because God has called you and He will make a way. Be steadfast in obedience. Though you may feel like no one else is for you, God is with you and it is God who has called you. “Have I not commanded you? Be strong and courageous. Do not be afraid; do not be discouraged, for the Lord your God will be with you wherever you go.” (Joshua 1:9 NIV)