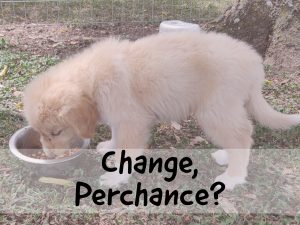 I recently got a puppy. He’s a mixed breed of Labrador and some sort of retriever, and he’s a bundle of fluff. I named this adorable fuzz ball Sully the Silly Pup. I already own a dog, a Shepherd-Catahoula mix, named Bruiser the Ferocious Guard Beast, and at first he didn’t get along with this intruder. I had to teach Bruiser to get along with his new playmate and I realized that he was not the only one who doesn’t like change.

Most of us have figured out in our career that the things we practice become easier for us. After five years in the classroom I’ve noticed there are some routines that have become automatic, almost second nature. The same can be said for the precision with which tradesmen perform their craft, the acumen of public speakers, or the watchful eyes of accountants. The more we do something, the better we become.

What the Lord was teaching me through Sully Pup was how reluctance to change might postpone a blessing. Bruiser didn’t like sharing attention with a pint-sized pal, nor did he appreciate the exploring nose that found its way toward his food bowl. What he didn’t know at the time was that he and Sully are going to be great friends, and I am already seeing their bond grow through playful jaunts through the grass, tumbles near the large water bowl, and adventures around the property. Once he embraced the change, he was free to enjoy his new buddy, and he seems rejuvenated by his canine companion.

Sometimes in the workplace we are hesitant to change because we are used to the way things are. A new boss, unfamiliar procedure, or innovative newcomer might ruffle our feathers and make us wish for the “good old days,” but we mustn’t overlook the opportunity for growth. The Lord could favor you in your new area, opening doors you hadn’t considered before. That new coworker might bring out a renewed energy in you with their ideas. In Isaiah chapter 43 and verse 19, the prophet alerts us “See, I am doing a new thing! Now it springs up; do you not perceive it? I am making a way in the wilderness and streams in the wasteland,” (NIV).

We should take each change as a chance, not a chore. We honor God in our workplace, and many times our coworkers watch how we handle changes around us. When we don’t understand a change or shift, it’s a great time to remember to “Trust in the Lord with all your heart, and do not lean on your own understanding. In all your ways acknowledge him, and he will make straight your paths,” (Proverbs 3:5-6 ESV). The Lord is orchestrating your steps, and each new twist and turn is a chance to see His wondrous works, in whatever profession you choose.

Be Blessed and Encouraged.