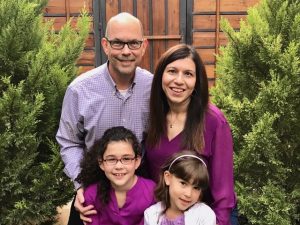 Whether on the university campus or in the Arab World, Scott Miller has always wanted to go where there was a greater need. A native of Ohio, Scott graduated from Kent State University in 1984 with a Bachelor of Education. After receiving his master’s from Assemblies of God Theological Seminary (AGTS) in 1987, he entered into full-time ministry, first serving as Chi Alpha director at Missouri State University in Springfield from 1988 to 1995, then going on to lead Chi Alpha at Boston University from 1997 until 2004.

The following year, Scott completed a transition when he became appointed as a worker to the Arab World. He currently serves with Live Dead alongside his wife Diana, to whom he has been married since 2006, and their two daughters Emma (10) and Ava (8). Scott opens up about how he has maintained his connection to the work of Chi Alpha.

Describe the impact Chi Alpha had on you as a student. How did it prepare you for full-time ministry?

It changed everything. I am still very tight with people from my university days from over 30 years. I was discipled in foundational biblical truths, and practical ministry on campus really gave me a heart to want to do full time ministry. I had incredible training opportunities through SALT conferences, Reach the University Institute, and the Campus Ministers Conference; it seems Chi Alpha was so resourceful in equipping its leadership. We had great leadership and spiritual investors.

How was ministering in an urban environment like Boston different from where you ministered in Missouri?

It was totally different. You saw much more diversity socially, politically, and spiritually. You had to rethink the way you did campus ministry. Things take a lot longer due to weather, traffic, and bureaucracy. It’s much more challenging to build community, and the expectations and pressure put on students is much higher. Put all that together, it’s a whole different beast.

How have you been working in your current role with Chi Alpha students?

In the past I used to take students overseas. Now I host and invest in students overseas. As part of the Live Dead training team, we invest in these students and prepare them for possible future overseas work. We have Chi Alpha graduates come in and give a year or two, and we host short-term teams for Chi Alpha around spring break and summer. God has really given us a heart for the Arab World and reaching the people of that region.

What advice do you have for any Chi Alpha alumni who are interested in Live Dead or other similar opportunities?

I would say that the best thing to do would be to take a short-term trip. Get exposure outside your culture. In this stage in your life, you have a lot of freedom that you will have less of as you get older and more established in your life and career. Abide in Jesus and be obedient to what He tells you. There is no better place to be than where He wants you.