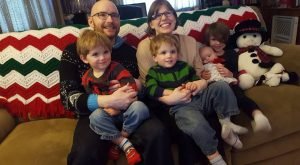 When it comes to Chi Alpha alumni in the marketplace, David Weiser is on the cutting edge. A software engineer, David received his Bachelor’s in Computer Science from the University of Wyoming in 2005, and his Master’s from Wyoming in 2007. He currently lives and works in the Seattle area with his wife Shelly and their four young children. David has also been serving on the founding committee for the National Chi Alpha Alumni Association. He shares how Chi Alpha prepared him for his current career and offered advice for those entering into the marketplace:

Chi Alpha became my people. In terms of faith community, I would call Chi Alpha my primary faith community while I was in college. The guys I became close friends with became close friends because we practiced accountability and transparency with each other. I feel like we really strove to live out James 5:16 and Galatians 6:2. As we grew from lower to upperclassmen, we found that the practice of accountability and transparency influenced the group of guys in Chi Alpha as well. It was really cool to see God use us to transform the lives of others.

How do you think Chi Alpha prepared you for your current role in the marketplace?

When I was in school, I had the idea that having a real job meant that I’d only spend my time at work writing code. By and large that is true. However, software is written by multiple people so it is quite handy to have people skills. Investing in Chi Alpha really prepared me for that: learning how to be welcoming to people, mentoring others as a core group leader, and learning how to have conflict with roommates that results in peaceful reconciliation were huge tools that I use a lot of the time and I learned them in Chi Alpha.

What role does technology have in advancing the mission of Chi Alpha?

Technologies come and go, but the mission of making disciples never changes. Technology may make it easier to communicate, but I don’t think it is central to the goal of making disciple-making disciples. With that said, I think that a practical application to advance the mission of Chi Alpha would be to help new grads, moving to a new city, connect with alumni to help the new grad get plugged into community, which is what we are working to facilitate through the National Chi Alpha Alumni Association.

What words of wisdom do you have for Chi Alpha students soon to enter the marketplace, and Alumni who are already there?

For students about to enter the marketplace: it is a whole new world for you. College is an amazing time in your life where you have the ability to quickly develop deep relationships with peers and everyone is, more or less, at your stage in life. Life after college was pretty tough for me. Being able to quickly develop deep relationships may not be possible. When you transition into serving at a local church you’ll find people that are in very different life stages than you. You may feel alone and you may miss the people in your Chi Alpha group. The best way I found to deal with that is just to get involved serving at your local church. Always ask, “how can I help?” instead of dwelling on why it is so hard to find new friends. By being intentional about serving, you’ll also find that you’ll be making your community at your local church.