Alumni in the Marketplace Spotlight: An Interview with Christos Makridis 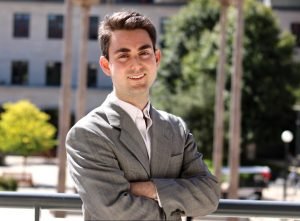 A native of Arizona, Christos Makridis received his bachelor’s in economics from Arizona State University in 2012, then went to Stanford University to work towards his PhDs in Economics and in Management Science and Engineering, which he completed in 2018.

Christos was actively involved in the Chi Alpha ministry on campus during his time at Stanford. In 2018, he was given the opportunity to work in the White House for the Council of Economic Advisors. Christos shares his testimony of how God opened this door for him, his experiences of living and working in Washington, and how Chi Alpha helped to prepare him for it.

Describe the impact that Chi Alpha had on you as a student.

Chi Alpha was the first genuine group of Christians that I encountered. I was bothered by the hypocrisy in the broader church, particularly after going to self-professed Christian elementary and high schools, so I wasn’t looking for a social organization. But I saw a flier about Chi Alpha in my dorm and checked out the website. The community looked real—and I still remember the first worship song (Forever by Kari Jobe) that was shared with me on the Chi Alpha email list! I was so surprised that there were such songs, but I loved the lyrics as they embody exactly the sorts of prayers and mindset that we should hold.

The ministry unambiguously helped cultivate my worship and love for Jesus grounded in the Bible. It was the gradual inculcation of the Gospel and interaction with others who also loved the Lord each week that had a cumulative effect on my development. Chi Alpha was a great community to serve and amplify. If there’s something I can do to help someone live more productively and fruitfully, I want to do it.

Share how you got the opportunity to work in the White House.

When attending the 2018 Allied Social Sciences Association Conference for economics, one morning as I was praying about the sessions that would be most productive to attend, I felt the Lord leading me to a particular session. It was led by then-chair of the Council of Economic Advisers Kevin Hasset.

I attended the session and approached him at the end given the link between his remarks and one of my working papers regarding the causal effect of economic sentiment (beliefs about the economy) on real economic activity (e.g., consumption expenditures). The idea resonated a lot with Kevin and he effectively offered me a spot on the CEA right there.

What are some of the challenges that come with working in Washington? What opportunities has God given you during your time there?

The biggest challenge is how so many people make promises that don’t get kept.  Moreover, the problems we’re trying to solve are so perplexing, requiring people to work together. And yet, rarely in politics do you control the incentives that someone else faces, so you do your best to collaborate, but projects and goals can fall through due to two parties not being equally yoked.

Nonetheless, there have been many opportunities that have unambiguously come from the Lord. First, I’ve met so many other people who are faithfully serving and following Jesus each day. That ranges from the Vice President’s weekly Bible study to others I’ve met through church, and through God’s grace of inadvertent encounters, like the National Prayer Breakfast. More generally, I’ve had the opportunity to get to know others as well who are simply focused on similar problem sets as me, whether it’s in the area of workforce and education, policy, or trade.

Second, the Lord has provided some excellent “spiritual endurance training” to help me further cultivate my spiritual endurance muscle. When you know Jesus loves us more than we love ourselves, and that He only wants what’s best, we can hardly complain about where we are because Jesus has us exactly where He wants us.

What is the biggest thing you have learned that you would want to pass along to Chi Alpha students and alumni?

If we truly believe that Jesus loves us and is sovereign, then we never need to worry about whether He is aware of what’s going on—of course He does! Keep showing up day-by-day and remaining obedient to the Lord.

What we need to focus on is that we’re asking the Lord for guidance and wisdom. I pray each day that the Lord would redirect me if needed, however big or small, and that He would help me optimize what’s in my sandbox—not what’s not there! We should be fighting hard each day on the frontier the Lord has put us on, looking to learn more and contribute more in whatever way possible.

Never stop thinking and dreaming: look for new ways to leverage your existing talents, cultivate them further, and develop new ones altogether. That requires proactively reaching out to people and understanding their pain points so that you can find ways that your talent can be plugged in to fill a very real need. The Lord gives us grace, but genuine appreciation for the gift He’s given us means making the most out of every opportunity.