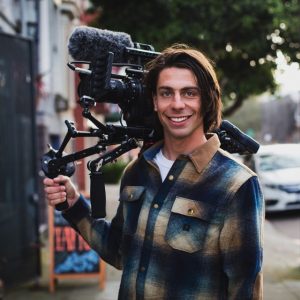 Ben graduated from Stanford University after he spent the entirety of his college career involved in Chi Alpha through leadership, worship and community service. Ben lives in the Bay Area around San Francisco, CA since he was 5 and continues to do so as a freelance documentary filmmaker. Ben describes how the act of surrendering in filmmaking leads him closer to the ultimate Creator. He also describes what it is like to be a Christain in the Bay Area as well as how he continues to live intentionally in his work and in serving the homeless community.

How did Chi Alpha impact your life?

Chi Alpha challenged and expanded my notion of what it means to walk in faith. This was a community that actively expected to hear from God and shared words with each other at meetings. They laid hands and surrounded people that needed healing or were being celebrated. They actually believed in and had seen miracles happen. They spent their Friday nights serving pancakes to students going from parties or to the library for late-night studying. They believed that those small gestures of love could be a bridge to a relationship. Through the encouragement of the community and personal Christ-in-me experiences that I had at that time, I walked away with a stronger sense that God could use my life to spread light in the world, regardless of my faults.

What is your current occupation? What do you do on a day-to-day basis?

I’m a freelance documentary filmmaker. So far, I’ve worked on a lot of short documentaries that are windows into someone’s inspiring life and story. I also work with podcasts and multimedia stories. It’s my belief that the power of story can bridge disparate people and create world more filled with compassion and understanding.

On a day-to-day basis, it’s not as glamorous as it might seem. It’s a lot of patient hours spent looking through footage and narrowing in on the right story structure. The clips that make the final cut end up being such a tiny fraction of all the footage captured, so it requires a lot of dedication to make it through an edit.

How have you learned more or experienced God more in film?

Creating documentaries is an exercise in trust. There’s so many variables that are out of your control headed into a production. Will my subject be open and honest about their story? What will the lighting be like during our shoot? Will there be a terribly loud siren going off during the most poignant moment of the interview?

You do everything you can to prepare, but there’s always an element of spontaneity and reacting to the present. Every time I come into a production, I have to open my hands and surrender all the things I can’t control. I know I’m not the creator of the story. I just hope to be in the right place and time to witness it unfold. And hopefully there’s still space on my memory card.

What is it like being a Christian in the bay area?

I’ve heard a lot of people that move here talk about how hard it is to be a Christian in the Bay Area. It’s kind of difficult for me to evaluate, because it’s really all I’ve ever known. It’s definitely against the status quo to be an active part of the Christian church (or any faith community for that matter). There’s some hostility, but overall I’ve found that people are way more curious and open than we give them credit for, because a lot have never actually heard the good news. Apart from the spiritual needs of our city, there’s a lot of physical needs that need to be addressed among those that are down and out. I’m blessed to walk through all of the challenges of living here as a Christian alongside of an extremely supportive faith community at Reality Church, SF.

How are you continuing to live on mission and be involved in discipleship?

Last year, I had the opportunity to feature the stories of some inspiring believers in the films that I produced. In the future, I hope to continue to have opportunities to share and tell spiritual stories that are often overlooked. I think there is a whole genre of spiritual documentaries that has yet to be explored.

Outside of work, I have a heart for serving the needs of and creating relationships with the homeless. I’ve had the privilege of always having a roof over my head and hot food on the table, and this is something that so many in

my city don’t have. I don’t understand what it’s like to live on the streets, but I hope to always have compassion for their needs and stories.

How have you found the ability to give in the marketplace impacts your walk with God/community?

As a freelancer, I don’t have a stable salary. My income comes in spurts. When God provides a payday, it’s an opportunity to not only pay the bills but give back to my church and local charities. I’m honored to support Sierra Hawthorne, a former leader from Stanford XA, who is currently serving with Awakening Ministries International, traveling to places like Sierra Leone and Guinea to share the gospel. I get to live vicariously through the courageous work that she does.

What advice/encouragement would you give other alumni who are trying to live on a mission in the marketplace?

As someone that is pursuing a “non-traditional” career, I can say that many people (even people that you closely trust) will try to dissuade you from chasing after your God-given vocation. Know your calling and press into uncertainty. He will be a lamp to your feet. He will give you the words to say when you have none. He will make a way, where there wasn’t a path before.