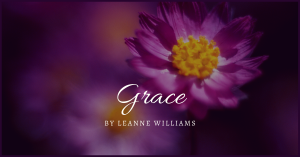 Have you ever thought about what grace means? Grace is usually defined as undeserved favor; basically getting what you don’t deserve. While that definition is true, it only begins to uncover the true nature of grace.

As humans, we give grace to others. Partly, we give grace because we are sinful ourselves and understand our own need for grace. Another reason why we’re able to give grace to others is that we can’t actually see the depths of another person’s sin. If we could, maybe we wouldn’t want to give them grace. But God’s grace is supreme to ours, totally unlike our grace in both motivation and supply. God is neither sinful Himself nor ignorant. God doesn’t give us grace because He needs it. God doesn’t give us grace because He is unaware of the totality of our sin. So why does God give us grace?

The nature of grace is surprising—it’s not what we expect. In the story of the prodigal son in Luke 15 where a father gives grace to his youngest son. The father’s youngest son, who left his home and family and spent all of his father’s inheritance money, finally decides to return home. From a long way off, the father sees his youngest son coming down the road. He immediately hitches up his tunic and runs to his son to embrace him and welcome him home. In first century Middle Eastern culture, a man never ran. Never. If he did, he would expose his bare legs by hitching up his tunic, which was shameful and humiliating in his culture. But the father is too full of joy at his son’s return to care. The youngest son is surprised, maybe even shocked, by his father’s grace and receives it with humility.

The word prodigal actually means wastefully extravagant. We tend to think of the son in this story as the prodigal wasting his father’s inheritance on extravagant and sinful things. In reality, the father, not his youngest son, is the true prodigal, using the best of everything he has to throw his son a party. God, just like the father in this story, is willing to make Himself look like a fool in order to give us grace. And in a lot of ways, He does look foolish to give us grace when we deserve the opposite. Grace is God being wastefully extravagant on us.

Why? The Hebrew meaning for the word grace (Khen) is favorable or delightful. Often it referred to a favorable gift given with delight. The primary reason why God gives grace is because He delights in us undelightful people. The God of the universe who is perfect, holy, all-knowing, just, full of truth, and holds all the power and authority, delights in you. His grace is a gift we cannot earn given simply because He chooses to delight in us.

I used to think of grace as a doormat that got stepped on and abused by people, something I didn’t want to give out of fear it would be wasted. But do you know what God accomplishes in us through grace? Receiving grace requires us to be humble, but it also gives us more humility. Grace points us to our need for the law and gives us the strength to fulfill it. God’s grace leads us to repentance. Grace teaches us to obey the law but also gives us a higher motivation to care for our neighbor, thus fulfilling the law, than the law ever could. God’s grace has the power to change us. When we encounter true grace, it marks us for the rest of our lives.

Is there any area of your life where you are rejecting God’s grace? Is there anyone in your life that you are withholding grace from? Have you been marked by God’s grace in a way that can’t be undone or forgotten?

Thank You, Lord, for Your grace that we can’t earn, yet we have it; can’t comprehend, yet we can know it through experience; and can’t predict its coming, yet we can rely on it. May we always be surprised by Your grace and never tire of being in awe of who You are. Amen.

Alumni in the Marketplace Spotlight: Corissa and Robert Rohloff