Beware of the Leaven 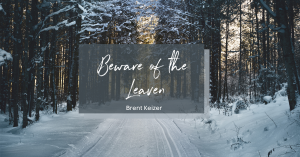 “‘Watch out!’ Jesus told them. ‘Beware of the leaven of Pharisees and Sadducees’” (Matthew 16:6).

How bitterly the Pharisees and Sadducees criticized Jesus. They criticized His words, background, history, teachings, authority, claims, and even His miracles.

We must be extremely cautious of criticism. Criticism comes easy, like second nature. Anyone can criticize because it requires no requisite knowledge or skill. It places myself subtly in a position of authority over the one or thing I criticize. I might be claiming an authority for myself I don’t have when I am critical.

Honor operates in the opposite spirit. I lower myself when I honor others. I lift and elevate even those I don’t agree with. Honor is ineffective when paired with criticism. “Yeah he’s a great leader, but ____.” As soon as you have introduced the next clause, whatever it might be, I have destroyed the honor. Suddenly, I am not left with the sense that person is worthy of honor at all when I hear, “but he isn’t organized,” “but he has a lot to learn,” or “but he isn’t always easy to get along with.” In this way, even a little criticism can leaven the whole lump.

Beware of the leaven of criticism. Watch out! How subtle it worms its way into our thinking and how we perceive one another. How subtly it causes us to do the opposite of what we are instructed to do in 1 Timothy 5:17 to “give double honor to elders who lead effectively” (emphasis mine), not double criticism.

A lack of pronounced generous, frequent honor may also reveal the leaven. “If you have nothing good to say, don’t say anything at all,” may work for a worldly person but not a Christ-filled person. If I am silent because my thoughts are critical and I cannot find anything to honor, the leaven is active and at work in me.

Our antidote is found in godly competition. Yes, even competition has its place in the Kingdom: “Outdo yourselves in honoring one another” (Romans 12:10). Be the best at giving honor. Outdo everyone around you in it. Be so generous there is no room left for criticism. If you must critique, let it be from so low a position and so rare a sound from your lips that it pricks with the precision of the surgeon’s scalpel and leaves no trace of excess bruising or pain. Actually, godly correction always has this distinction about it: it always honors the one being corrected. If I don’t leave with a sense, even in being rebuked, that you esteem me as a brother, it is not criticism God’s way.