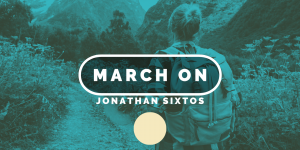 We’re releasing for spring break. The kids are excited, the parents are a bit anxious, and the school is cautious. March On. In times of uncertainty I look to my faith to steady me, and I’d like to share some encouragement with you all.

When I was a senior at Texas State University, I faced a choice to either assimilate into the campus I was working at or choose the return home and start anew. I took this matter to the Lord in prayer and kept feeling the impression from the Holy Spirit that I should return home “to my father’s house.” I sensed this meant more in a ministry sense than a familial sense. I made up my mind and the next day I received a job offer from the school in which I was training and student teaching. I quickly double checked with God that night just to make sure He hadn’t changed His mind about my future. After receiving confirmation, I returned to the school the next morning and thanked the administration for their consideration. I had no job prospects and no plans, just a peace from God that something good was on the way. I would March On.

A couple days later I got a call from the Human Resources director for my local school district. He had been reading through a resignation letter from a teacher who would not be returning from Christmas break, and he remembered meeting me at a job fair in San Marcos. He asked if I was still interested and I pounced! We hit a snag when he learned I wasn’t certified just yet; I still had one more test to take for the State of Texas. I convinced him to at least get me an interview at the school and he obliged. On my way down south, I fervently prayed for the favor of God over what would soon transpire. I invoked the prayer of a powerful old testament prophet and asked “Where is the God of my parents? Where is the God of my pastors? God if this is your will, be swift. Split the semesters wide open and make a way for your servant.” (A reference to Elisha taking up Elijah’s mantle at the Jordan River.) Full of faith and armed with my educational portfolio I marched into the interview and put my best foot forward. The principal notified me he had another candidate to interview next week.

Twenty minutes later I got the call.  I began working at my current district two days after attending The World Missions Summit 3 with my Chi Alpha family. The Lord has paved a path for me over these last seven years that included state committees, community task forces, Texas Teacher of the Year semi-finalist, and media spokesperson for public education. Moreover, he made a way in “my father’s house” to step into youth ministry, media ministry, and even ordination through my church. These doors opened because I was obedient to His plan and His will. Whatever His will is for you, friends, March On. In times of uncertainty, we can be certain that He cares for us.

Be Blessed and Encouraged,