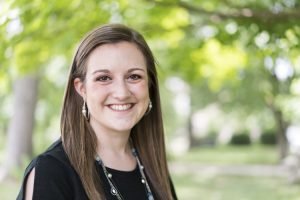 A native of Wheeling, West Virginia, Taylor Albertini graduated in 2017 from West Virginia University (WVU) with a BA in Biology and minor in Leadership Studies.  Following graduation and completion of the Campus Missionary-in-Training (CMIT) program, Taylor headed west to Springfield, Missouri to begin work on completing a master’s degree in Clinical Mental Health Counseling at Evangel University.

God also opened up the door for Taylor to work in the National Chi Alpha Ministry Center, where she currently serves as the Cross-Cultural Missions and Field Administrative Coordinator. She is also involved in the Network of Women Ministers, and recently published an article for Influence Magazine titled “What Young Women in Ministry Need from Mentors.” Taylor discusses her current role in Chi Alpha, as well as her heart to see young women raised up in ministry.

Chi Alpha can mean different things to different people; for me specifically, it meant family. I was blessed to grow up in the Church and went to WVU wanting to follow Jesus. But I discovered early on that was going to be tough at what was, at the time, the number one party school in the nation. I spent much of my freshman year lonely and discouraged.

When I met the Chi Alpha team that came to my campus my sophomore year, I quickly found that they were genuinely interested in my life. They weren’t interested in building up their ministry numbers or promoting their own agenda, they simply cared about me. One of the first times I knew that this thing called “Chi Alpha” was the real deal was when my small group leader came to sit with me for hours in the library while I studied for a chemistry final I was stressed about—even after I’d missed her small group and turned down her invitations to hang out because I was so focused on my grades.

Psalm 68:6 says that God sets the lonely in families, and for me, that is exactly the impact that Chi Alpha at WVU had on my life.

What is something about the National Chi Alpha Leadership Team that you want people to know?

I want people to know that every single member of the National Chi Alpha Ministry Center team is the real deal. Each individual genuinely lives out Chi Alpha’s principles of honor, respect, unity, and prayer—both when they are functioning in an up-front leadership capacity andwhen they are behind the scenes in everyday life. Everything this team does is done with utmost excellence and with the lost student in mind—everyone has that mentality.

Explain the burden God has placed on your heart for women ministers.

My burden for women in ministry is to see young women raised up in ministry. My heart is to see older generations of the Church come alongside called young people. We need each other.

What advice do you have for young women in Chi Alpha who feel called to ministry, whether it’s Chi Alpha, foreign missions, or the local church?

Seek out mentors (plural) who will walk alongside you—and don’t be afraid to initiate the conversation in asking them to do so. Also, as a mentor of mine once encouraged me to do, put language around your call. For example, if you feel called to be a pastor, use the word “pastor” specifically when talking about your call.

Finally, have patience and joy with the process. For me, my calling to ministry has been more of a process than a one-time event. I’m a planner and want to know all the details and the outcome up front, so trusting the process is hard for me! Make decisions that align with where you believe God is leading you, and then let go and trust Him to bring your call to fruition, in His way and in His timing—“He who calls you is faithful; he will surely do it,” (1 Thessalonians 5:24).