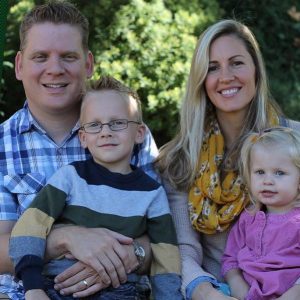 Just keep saying ‘Yes’ to Jesus and you will live a life beyond your wildest imagination.

Steve Kramer is a living testimony that God can accomplish His purposes through anyone, regardless of their limitations. Born premature with Cerebral Palsy, Steve overcame many difficulties growing up as a boy. He graduated in 1996 from the University of Oregon with a Bachelor of Journalism degree. Following graduation, he worked for two years as a TV news anchor in Oregon, but felt God calling him to full-time ministry. After getting his Masters in Theolgoical Studies from AGTS in 2002, Steve spent ten years as a missionary to the Netherlands, working to plant churches alongside his wife Julie, who he married in 2005. In 2014, God led The Kramer’s back to Steve’s alma mater. Steve became University of Oregon’s Chi Alpha Director, leading the campus ministry that he was a part of during his time as a student. Steve and Julie are the proud parents of Kees, born in 2009, and Sela, born in 2012.

Steve shares his memories of Chi Alpha and his time in the Netherlands:

Describe the impact Chi Alpha had on your life as a student.

The first event I ever went to as a student was a SALT retreat in Hungry Horse, Montana. The Chi Alpha group gave me a place to belong as a freshman and I met many friends in Chi Alpha, including a guy who would become one of my best friends to this day. Chi Alpha also had a big impact on my life as an Assemblies of God Theological Seminary student (while getting my MA in Theological Studies), I was part of Brad Novosad’s small group (current Chi Alpha District Director for the Great Plains District) and also led several teams to the Netherlands. It was my friendship with Sam Houston State Chi Alpha during those trips that really inspired me to think God might be calling me to be a campus minister.

What are some of the ministry doors God opened up to you over the course of your time in the Netherlands?

My wife Julie and I and our two kids served two terms in the Netherlands. We helped in the area of church planting and pioneered university ministries, including DR:UM (Damascus Road University Ministry) in Maastricht, Netherlands. The university ministry began meeting in a bar and now is being led by a couple we helped disciple there and at their first meeting a few weeks ago they had fifty-five to sixty students. Many of these college graduates have now gone on to serve as missionaries around the world. We thank God for what He has done.

Steve Kramer as a child.

What are some of the challenges that you encountered along the way?

My life is a miracle in that I was born with Cerebral Palsy and was never supposed to live or walk. That has been quite the challenge but also the most amazing blessing as I have seen God be strong in my weakness.

What is it like for you going back to Oregon to become the Chi Alpha Director? What are you most looking forward to?

The campus has changed a lot over the past twenty years, but I believe students still have the same hunger to know God. I also think that there are many students who are just one encounter away from God and discovering His call on their life. I am most looking forward to seeing God raise up missionaries that will reach the marketplace and the world, both here and abroad.

What advice would you have for Chi Alpha students and alumni who feel called to go into the world missions field?

When I was commissioned as a missionary, my dad told me, “Steve, just keep saying ‘Yes’ to Jesus and you will live a life beyond your wildest imagination.” My life has truly been that. I would say to any Chi Alpha students or alumni who are called to the world missions field—don’t try and figure it all out, but just keep trusting God and take the next step He has for you. Keep saying “Yes,” and one day you will look back on your life and be amazed at all He has done.